Earlier this month I completed the weathering on UP 1213, an Athearn Genesis GP39-2. The project was complex both in its scope and execution. The prototype has a very distinct appearance which reflects its decades of service on the UP. Replicating this appearance presented a significant challenge especially replicating the uniquely faded paint and lettering and grimy appearance. I knew before starting that my tried-and-true methods would only get me so far, and that to succeed in replicating the prototype I would have to try new methods and adopt a different approach. Thus, slow weathering was born. 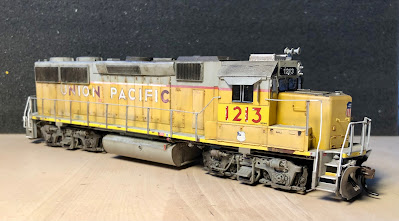 Slow weathering is not simply “taking one’s time” or “being careful” or “working slowly.” Rather, slow weathering is the consistent and deliberate application of effort to a weathering project free from the pressures of time and efficiency. It is a craftsman’s approach that prioritizes patient deliberation over efficient production. It allows for contemplation, reflection, and adaptation through the life of the project. Slow weathering enables the development of skills and confidence. And, most importantly, it renders exceedingly complex projects more manageable and ensures better results.

Slow weathering works well for two main reasons. First, it removes the undue pressures of time and efficiency and, secondly, it allows for exceedingly complex projects to be tackled manageably.

Whether we recognize it or not, once a new project begins, we set an internal clock that starts ticking down to when we think the project should be completed. Invariably, as the internal deadline approaches, a strong temptation to take shortcuts or expedite certain processes builds. The results can be subpar. Slow weathering seeks to combat this approach by intentionally removing any emphasis on time or efficiency and instead place that emphasis on the process and steps of the weathering itself. In slow weathering a project is done when its done, not when we think it should be.

Secondly, slow weathering allows complex projects to be more manageable. As I explain in more detail below, this approach breaks projects down into approachable chunks allowing for greater focus and higher quality work over the entirety of the project.

Slow weathering projects require adequate reference and a plan of attack. Both are necessities of working deliberately and consistently over a long period of time. A plan helps define what needs to be done on the project in any given session and reference guides that work. Certainly, weathering can be done without a plan or reference, but without a goal and articulated process, it can be easy to skip steps, take shortcuts, and rush when the project starts to get stale.

For 1213, I collected a set of reference photos available online and after careful study of the reference, drafted a workflow plan for the project. Whenever I felt lost or unsure on what to do next or exactly what colors to use, I had guidance readily available and could quickly refocus. Additionally, when I sat down to the workbench, my plan helped me be focused in what I wanted to achieve in that given session. There is a big difference in “fading the long hood” and “fading the three leftmost panels on the long hood.” Both tasks ultimately achieve the same ends, but the latter is much more intentional and focused. This micro-level of focus is beneath the success of the slow weathering approach.

Slow weathering is best when applied to overwhelmingly complex projects with high levels of detail. Trying to hand paint a graffiti covered boxcar, or, in the case of 1213, hand painting the faded numbers is a daunting and easily overwhelming task. Detailed weathering takes mental endurance, and it is often unreasonable to try an accomplish a certain step on an entire model or even just one side of the model in one sitting. In slow weathering, the answer is to focus on individual chunks, or small sections, at a time.

For example, I faded the lettering on 1213 by painting over the factory applied decals with acrylic paints. This was a time-consuming process and one I frankly wasn’t looking forward to! My solution was to only work on one letter at a time and maybe only 2 or 3 in a single sitting. In dividing the work, I found I was able to focus effectively on each letter individually and not become overwhelmed by the seemingly insurmountable prospect of painting all the letters on both sides of the model. Before I knew it, all the letters were faded.

Finally, slow weathering requires consistency. Because complex projects tend to require work that is extended over multiple months (or longer!), engaging with a project consistency helps maintain interest. I recommend building time into the daily routine for the project. A marathon workbench session or “binge” weathering can be an exciting prospect and fun way to spend a weekend, but it is not an effective means to tackle complex weathering projects or consistently work at a high level. Rather, the slow weathering approach encourages a consistent effort applied in shorter daily sessions (between 30 minutes and 2 hours). Limiting the length of the sessions will prevent fatigue and keep the scope of the project manageable. Working daily will help maintain interest with the project and prevent inconsistencies in color or technique that can arise when a project is left fallow for long period of time.

In weathering 1213, I set aside 30 minutes at the end of my day after dinner to work on the model. After a few weeks, sitting down at the workbench once the dishes had been put away became a habit that I didn’t have to thing too hard about. I rarely had to refer to my workflow plan to remember where I was because I maintained consistent engagement with the project. I remembered what I had worked on the night before and simply picked up where I left off.

Slow weathering is by no means a perfect or the only approach for weathering, but I have found success employing it. The projects that I engage with consistently and deliberately without feeling crunched for time or pressured to finish quickly are often those projects that I enjoy working on the most and am ultimately most proud of. I have done my best work adopting a slow weathering approach and will continue to utilize it into the future.

Posted by John Caffarelli at 5:08 PM